YOUR LOCAL EXPERTS IN rat CONTROL

We Provide the Portland/Vancouver Area With Economic & Ecological Solutions for Rat Removal & Prevention.

In the Pacific Northwest, there are two species of rats that are responsible for most of the infestations that we treat: the Norway rat and the roof rat. Our rat exterminators are specially trained to identify the rodent that is causing you problems and perform effective rodent control. 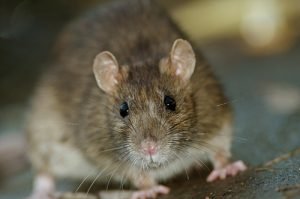 These rats are also known as house rats, brown rats, wharf rats, sewer rats, water rats, and gray rats. They are the largest of all rodents. The head and body are 7 to 10 inches long, while the tail adds an additional 6 to 8 inches. They have a stocky build, weighing between 12 to 16 ounces. Their fur is coarse, shaggy, and brown with speckles of black hair. The belly is light-colored, their eyes and ears are small, and their muzzle is blunt. The tail appears bare but has a two-toned color, and it is always shorter than the head and body combined. Norway rat droppings are about 3/4 of an inch long with blunt ends.

This species is smaller and sleeker in appearance than Norway rats. The scaly, uniformly dark tail is longer than the head and body combined. Roof rats weigh about 10 to 12 ounces and are mostly black with some gray coloring. The fur is soft and smooth, their eyes and ears are large, and their muzzle is pointed. The belly varies from buff white to all gray. Roof rat droppings are about 1/2 an inch long and spindle-shaped with pointed ends.

The reproductive biology of both species is similar, except Norway rats produce between eight to 12 pups per litter, while roof rats produce four to eight pups per litter. Both species of rats breed year-round, but they are especially prolific during the spring and fall. Pups are born blind and without fur. Within 14-17 days, they are covered with fur and the eyes and ears are open. They are weaned by the third or fourth week of life, and they become sexually mature in as few as two months. These young adults can mate and produce another litter within 21 days of conception. The average life span of both species is between two to three years.

Norway rats prefer to build their nests in burrows under buildings, sidewalks, low shrubs or ground cover, wood piles, garbage dumps, railroad track beds, and stream/river banks. The burrows typically have one main entryway and at least one escape hole. Norway rats can burrow long tunnels from nests to food sources, reducing their exposure to predators. These tunnels may also extend 4 feet deep into the soil.

Conversely, roof rats are better climbers. As such, they prefer to build their nests within walls, attics, vines, or trees. They create runways along pipes, beams, wires, or horizontal ceiling joists, often leaving a dark-colored layer of grease and dirt to mark their trails. Roof rats may live near the ground, but usually frequent the attics, rafters, and crossbeams of buildings.

The rats’ foraging range is 100 to 150 feet from the nest. They prefer meat, fish, and grains, especially cereals, but they will eat almost any item that has nutritional value. They also require a separate, non-food water source.

Rats are nocturnal and have poor vision. As such, they have keen senses of smell, taste, hearing, and touch to compensate for their lack of vision. They can also scale walls and walk across telephone wires with ease. They are excellent swimmers, capable of navigating a half-mile through open water. They are also amazingly resilient, easily surviving falls up to 50 feet. They are extremely shy about new objects and exercise much caution when things change in their environment.

Rats occasionally bite people and may kill small animals. They carry parasites that can spread many diseases, and they can contaminate food and air duct systems with urine and excrement. They can also cause considerable damage to homes and other buildings by gnawing on wiring, plastic, cement blocks, air ducts, and insulation. These pests are also the number-one cause of electrical fires in a home. They destroy yards by eating garden vegetables such as corn and squash. Rats can also damage ornamental plants by burrowing among the roots or feeding on new growth and twigs. If you suspect that you have a rat infestation in your Portland-area home or office, contact the rat exterminators at PestLock for affordable, effective rodent control. In addition to ridding your property of these pests, we can also complete crawlspace restoration to ensure the area is clean and free of rats.

**Special Note: Do NOT seal entrances while under treatment as the rats can chew through the repair, causing more damage.

When our team provides residential or commercial rodent control for you, it may take five to seven days for the rats to become comfortable around bait stations in their environment. Once this happens, a constant reduction in activity should occur in the next 30 days or so. Also, it is not uncommon to have sightings after the initial treatment, especially in neighborhoods with heavy activity.

Let us help lock Rats out of your home or business